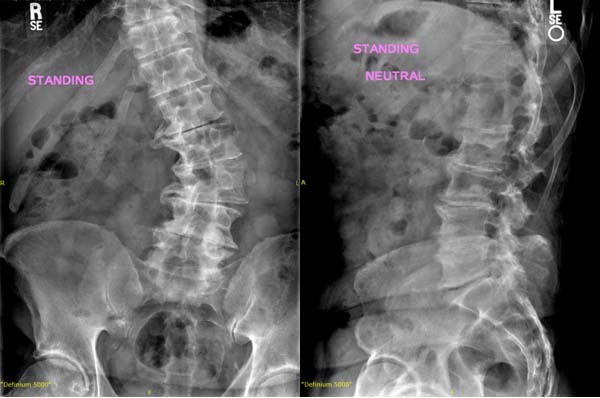 Degenerative Scoliosis is a condition most commonly appearing in older adults. It is the result of long-standing spondylosis and degenerative disc disease. Patients with Degenerative Scoliosis exhibit a lateral curve in the lumbar spine often with rotation of the spine. This is to be distinguished from hyperlordosis, which is an exaggeration of the natural curve, and kyphosis, which a curve of the spine forward (in the oppose mode of the natural curve).

Contrary to almost all surgeons, who offer only two long fusion rods tied to pedicle screws, Prof. Dr. Bertagnoli offers to most patients an alternative surgery, which preserves the motion of the spine, supports the spinal column, and stabilizes the spine. This he has termed 360-motion-preservation.

360-motion-preservation is not a single spinal device and/or procedure, but a concept, which includes many types of spinal devices and procedures. The name and concept is adapted from 360-fusion. The major difference between the two is that 360-motion-preservation preserves the motion of the spine and 360 fusion leaves the patient's spinal segments in a permanently fixed position.

Similar to a flat tire, which makes the steering and support of a car unstable, so does a flattened (desiccated and/or herniated) disc make the spine unstable. These discs must be removed and replaced with an Artificial Disc Replacements (ADRs), which will reestablish the height of the intervertebral disc spaces and add stability to the spine, is part of 360 motion preservation.

To extend our automobile analogy further and to complete the surgery the facet joints, like the tie-rods of a car that guide and limit the movement of each spinal segment (the tires). It can be more directly said that the horizontal stability of the spine is the main responsibility of the facet joints, which limit the rotation at each spinal level.

When the spinal bony processes, which make up the facet joints, are missing because of a procedure like a laminectomy, or malfunctioning from disease, 360-motion-preservation utilizes dorsal pedicle screws as anchoring points for posterior attachment of the motion-couplers. These screws are featured prominently in the image to the right. However, unlike fusion, the DSS connectors in motion preservation are spring-like allowing for movement. The spring-like connectors help return the spine segment to a neutral position. The nature of these connectors can vary, so the correct application and sizing of the connectors is critical to a good outcome. 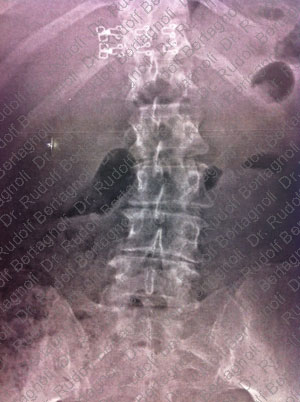 Degenerative scoliosis can present not only with a coronal C curve in the spine, but also with rotation of the spine. The C curve is very obvious in the second picture, which is an MRI and to a lesser extent in the image (X-ray) to the right of this paragraph. However, X-rays help us to better see the beginning of the rotation exemplified in the image to the right. This is because they show us the spinal processes in relation to the vertebral body. In the image we see clearly the spine beginning to rotate to the right side (the left side of the image). In the top image we see a much more advanced rotation. 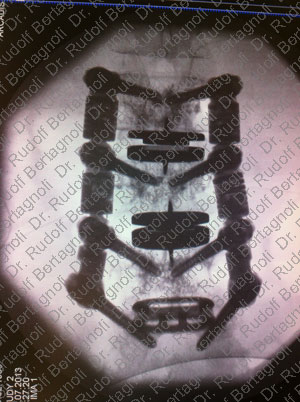 In cases of degenerative scoliosis, particularly if a spondylolisthesis is present, hybrid constructs are frequently used, i. e. the use of 360 fusion and 360 motion preservation in combination and adjacent to each other. The image to the right shows us the two upper segments with 360-motion-preservation tied together with a 360-fusion in the lower segment. The instrumentation, which Prof. Dr. Bertagnoli uses, gives him the ability to connect motion segments with the fusion segments, which greatly enhances the ability of the surgeon to preserve a majority of the motion of the spine, while stabilizing it. This is a rather unique property of DSS, which is an invention of Prof. Dr. Bertagnoli. Again we must say that the correct selection of the screws and connectors must be made by the surgeon. This is very much an engineering task.

Motion-preservation of the back is a more technically demanding surgery than fusion and requires much more engineering than traditional back surgery. The surgeon must look at each case’s individual characteristics more so than previously done in medicine.