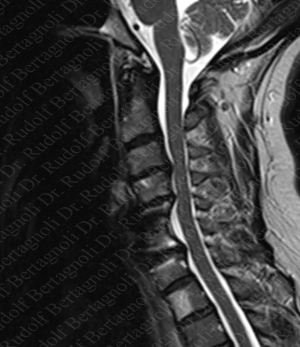 Cervical myelopathy begins with compression of the spinal cord in the cervical spine. Edema begins to build about the spinal cord as the cord attempts to protect itself. This edema appears as white in a t2-weighted MRI images.

Spinal nerves inside the spinal cord, which run from the brain to the legs will be affected. Thus these medical signs will become pathological:

Very often artificial disc replacement may be the appropriate surgical solution, particularly if degenerative disc disease is the primary cause.